We have recently released three papers exploring microlensing and supernovae constraints on Primordial Black Hole (PBH) abundances, and pointing out some clues in observations of the possible existence of massive PBH, with an abundance comparable to the one of Dark Matter.

In [1], we identify seven observations pointing towards the existence of primordial black holes (PBH), constituting the whole or an important fraction of the dark matter in the Universe: the mass and spin of black holes detected by Advanced LIGO/VIRGO, the detection of micro-lensing events of distant quasars and stars in M31, the non-detection of ultra-faint dwarf satellite galaxies with radius below 15 parsecs, evidences for core galactic dark matter profiles, the correlation between X-ray and infrared cosmic backgrounds, and the existence of super-massive black holes very early in the Universe’s history. Some of these hints are newly identified and they are all intriguingly compatible with the re-constructed broad PBH mass distribution from LIGO events, peaking on PBH mass \(m_\mathrm{PBH}\simeq 3 M_\odot\) and passing all other constraints on PBH abundances. PBH dark matter also provides a new mechanism to explain the mass-to-light ratios of dwarf galaxies, including the recent detection of a diffuse galaxy not dominated by dark matter. Finally we conjecture that between 0.1% and 1% of the events detected by LIGO will involve a PBH with a mass below the Chandrasekhar mass, which would unambiguously prove the existence of PBH. 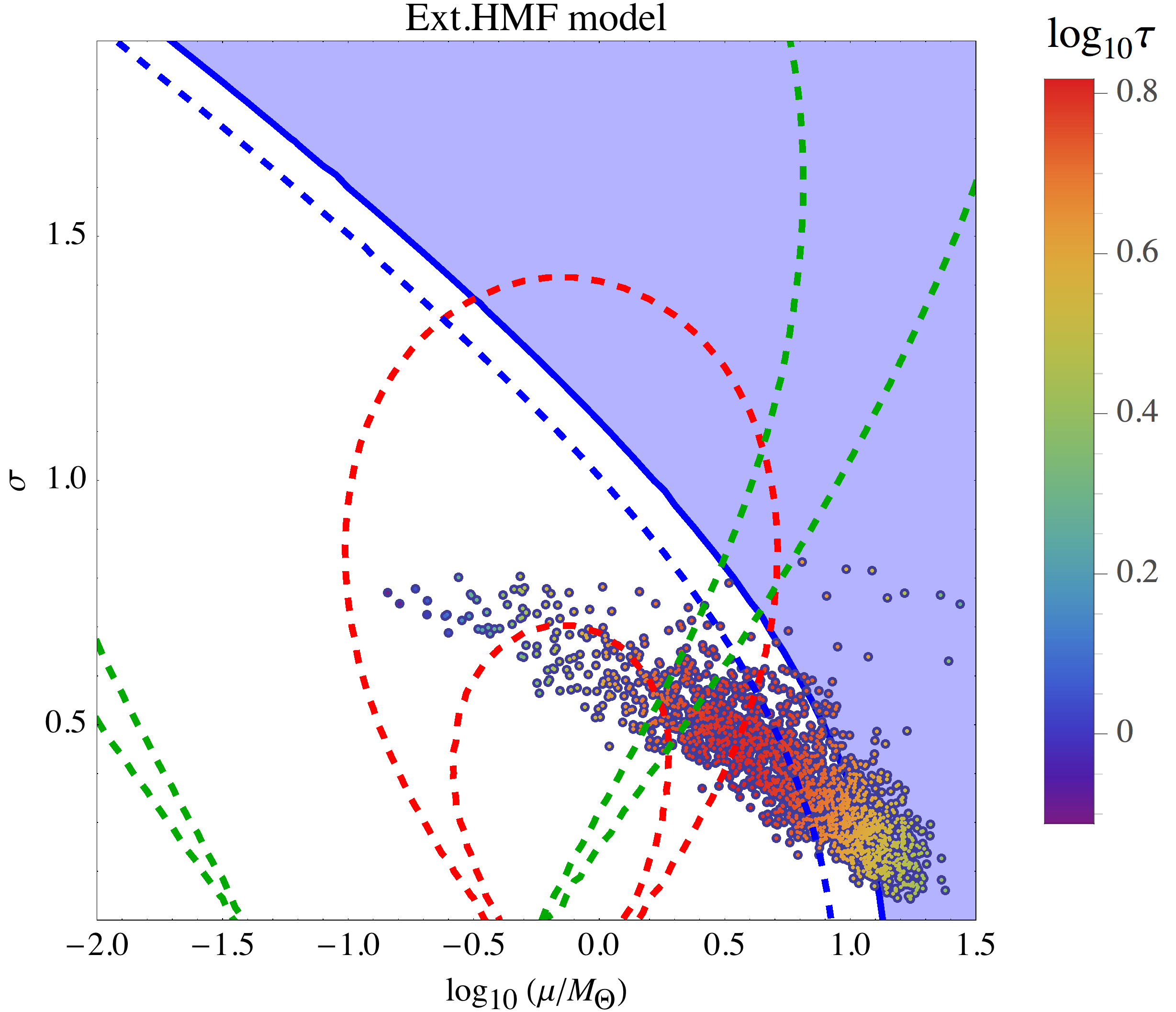 Reconstruction of the PBH mass spectrum assuming a log-normal density distribution of mean \(\mu\) and width \(\sigma\), for an extended halo mass function (Ext.HMF) clustering model. The color scale of the MCMC points represent the model merger rates in units of \(\mathrm{Gpc^3/yr}\). The shaded blue region is the parameter space excluded by the dynamical heating of star clusters in the faint dwarf galaxy Eridanus II, assuming it has a central IMBH (solid blue), or not (dashed blue). M31 and quasar microlensing events favor the regions between the red and green dashed lines respectively. 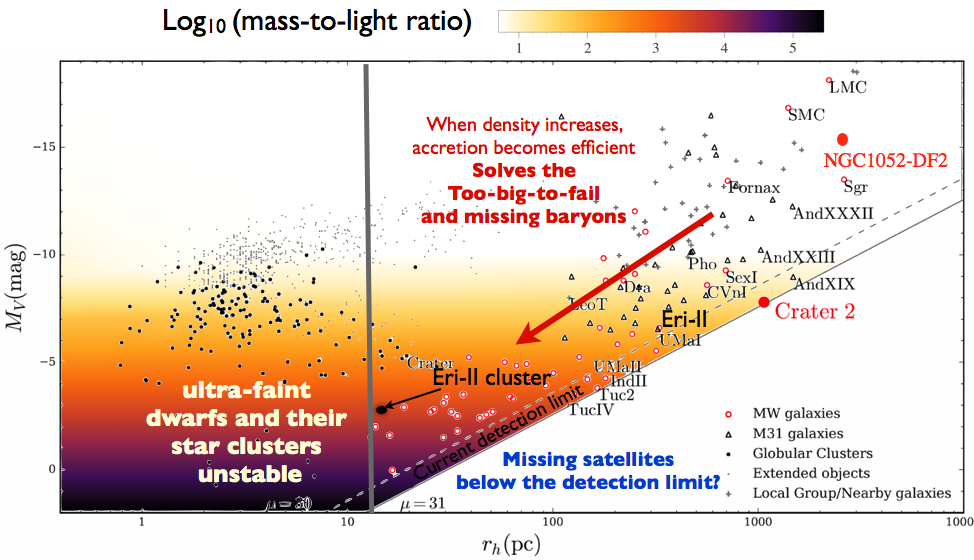 Absolute magnitude vs. the half-light radius of dwarf galaxies, globular clusters and extended objects in the Milky-Way (MW), M31 or galaxies of the local group. The vertical gray line represents our estimation of the limit below which DM-dominated faint dwarf galaxies, or their star cluster, have been dynamically heated by solar-mass PBH, if they constitute all the DM. The non-detection of faint dwarfs on the left-hand side of this line is a clue in favor of the PBH-DM scenario. In this scenario, early matter accretion makes dwarf galaxies naturally faint, most of them being potentially located below the detection limit, providing a solution to the missing satellites problem and to the missing baryons. Accretion onto PBH in large and dense halos would also suppress star formation, which might also explain the too-big-to-fail problem. The predicted mass-to-light ratio after a PBH accretion episode is represented by the colored scale and is roughly consistent with the ones of dwarf galaxies. The DM dominated Crater 2 and the recently detected diffuse galaxy NGC1052-DF2 lacking of DM, are pointed out and fall respectively below and above the expected transition in mass-to-light ratios.

In [2], we show that PBH as the main dark matter component survives the cosntraints from the absence of detection of supernovae lensing. In [3], the constraints on PBH abundances from micro-lensing surveys are re-evaluated in the case PBH with a broad mass distribution are clustered in the galactic halos.