The two recent gravitational-wave events GW190425 and GW190814 from the third observing run of LIGO/Virgo have both a companion which is unexpected if originated from a neutron star or a stellar black hole. Sébastien and Juan García-Bellido investigate the possibility that these objects are Primordial Black Holes (PBHs) in Ref. [1].

The known thermal history of the Universe predicts that the PBH formation is boosted at the time of the QCD transition, inducing a peak in their distribution at this particular mass scale, and a bump around 30−50 \(M_\odot\). We find that the merging rates inferred from GW190425 and GW190814 are consistent with PBH binaries formed by capture in dense halos. At the same time, the rate of black hole mergers around 30 \(M_\odot\) and of sub-solar PBH mergers do not exceed the LIGO/Virgo limits. Such PBHs could explain a significant fraction, or even the totality of the Dark Matter, but they must be sufficiently strongly clustered in order to be consistent with current astrophysical limits. 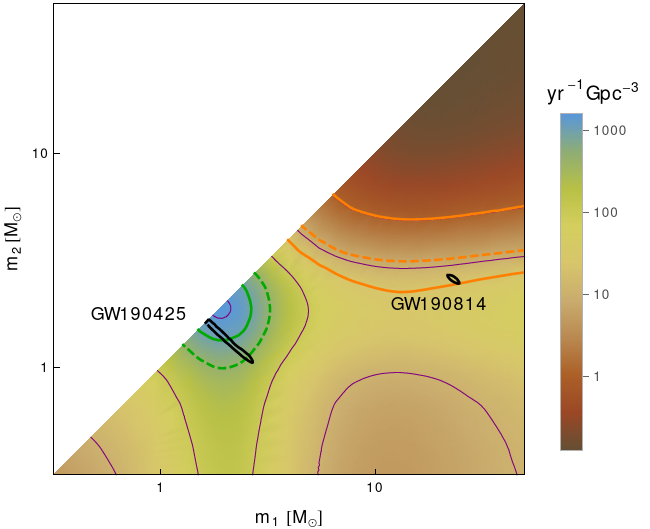 This figure shows the expected merging rate distribution for primordial black holes, as a function of the two component masses and for tidal capture in dense haloes. The green and orange lines indicate the rates inferred from the GW190425 and GW190814 events (dashed: best fit, solid: \(90\%\) confidence limits), in agreement with the primordial black hole predictions.